Will Wynn Gives the IPBN a Breath of Fresh Air

The Honorable Will Wynn, the former Mayor of Austin Texas, was the perfect keynote speaker to kick off the IPBN’s first event of the St. Patrick’s Day Sustainability Conference. Joining via zoom, Wynn began the conversation by telling his career story—highlighting his experience working as an architect while attending university, “using triangles and T-squares. I wasn’t really an artist, I enjoyed engineering and math, and then got my architecture degree and practiced at large firms…I spent several years in commercial real estate and took that experience into this strange detour into City Hall in Austin later.”

Describing Austin, Wynn said, “There was always a fairly strong environmental ethic…you feel like you’re in a big college town. So because of that, building office buildings… became somewhat political. It was very much business vs. environment; more buildings, more roads, more need for schools, more water plants, more power plants…and so I found myself at City Hall frequently on the receiving end of regulatory debates…and was getting bludgeoned by bureaucrats. In 2000, he decided he should step up and steer the other side forward so he got elected to what would be two terms and began doing just that. He started by looking at how the city operates with its building codes and energy. Wynn said, "The city of Austin owns a nuclear power plant, a coal plant, and its own electric utility plant, so I was able to get involved and make a significant difference.”

In 2000, Wynn started looking more in-depth at the policies of the utility plants, something that had been overlooked by his predecessors. “In the scheme of things it was a relatively clean utility system…but I realized we had zero renewable energy. I declared that we were gonna meet the demand for electricity with the population growth by conservation,”  Wynn said. The keys for success moving forward were efficiencies in energy and renewable sources. To that end, the city built wind farms, a 350-acre solar field, and a wood waste biomass plant. Today, the coal use is almost zero with 50% renewable energy use, bringing the city to 75% non-carbon energy in a state known for its oil and gas production. Perhaps the best part aside from its positive impact on the planet, is that bills for consumers did not rise, nor did the fees for the city that many still erroniously associate with going green.

With that, it was easy to continue greening with ride-sharing and bike lanes, curb-side computer recycling, pretty much anything they could think of, funded in part by the new wind and solar farms themselves. Wynn said, “We went to the private sector and do a solicitation to build more wind farms to get tax credits for the company, and contract for all the electricity they would generate.” The city then went to procure contracts with electricity clients to verify the demand and promote the idea of using renewable energy. Each person would get a certificate that they were not emitting any CO2—their houses were running on renewable energy through the private sector contractors. "People were genuinely excited to sign up," said Wynn.

He went on to say, “Austin was a green oddity in this dirty state. Texas emits more CO2 than all but 5 countries. If it were its own country, Texas would be the 6th most polluting country on the planet just after Canada.” Texas has a very hot climate, so most of the energy used comes from air conditioning, with a stand-alone grid at 77,000 megawatts of electricity, which is bigger than Germany, France, and Spain. Wynn added, "I’m afraid to look to see what that scale really is!”

Over five years, Wynn was able to establish a chilled loop system that supplies a renewable-energy storage system of ice that, as it melts, can deliver air conditioning to the new green-standard buildings that cover a large chunk of the downtown Austin area. According to Wynn, "These buildings are the 20 tallest buildings in Austin and West of the Mississippi in the US.” The effect of efforts like this is that there are no air-con units on the roofs of these buildings, so it allows architects to have fun with the design of the rooftops so the architecture is better, the live-ability is better, and the tax base is dramatically improved while the carbon footprint of the city has dropped. “You can do more from a climate protection perspective and have more of these economic benefits at the same time,” said Wynn.

Wynn is still pushing for more discussion on a lot of the initiatives that he spearheaded. "Even the big 30-megawatt solar farms I built weren’t allowed to get their electricity to Austin. The real discussion on solar is rooftop solar...There were plenty of houses that had rooftop solar that are designed and sited well...In Austin they changed the pitch of the roof to put the solar panels to be little generating plants. The solar advocates need to raise awareness on concentrated solar and distributed rooftop solar on every structure imaginable." said Wynn.

Before the Q&A segment of the conversation, Wynn described himself as “a grandson of Ireland, I was able to get my Irish citizenship five years ago celebrating my 50th birthday…Then I got serious about living and working in Europe.” Now Wynn lives in Cascais, Portugal where he appreciates the friendly sun after having spent so many years under the harsh conditions in the blistering, dry heat of Texas. He fell in love with Portugal during a trip he made in 2009 under invitation by the present Prime Minister of Portugal, Antonio Costa to present some of his ideas to attract youth and avoid a brain drain in Portugal and under subsequent visits to Guimareãs and Lisbon. When the latter was named the green capital of 2020 it only further sealed the deal for Wynn and his family to make the move and semi-retire while still telling his story and supporting current green initiatives like new sustainable construction products, the growing electrification of transit, and more.

Please don't miss the forthcoming events of the series. You can still register for the program here and enjoy two more days of green talks! 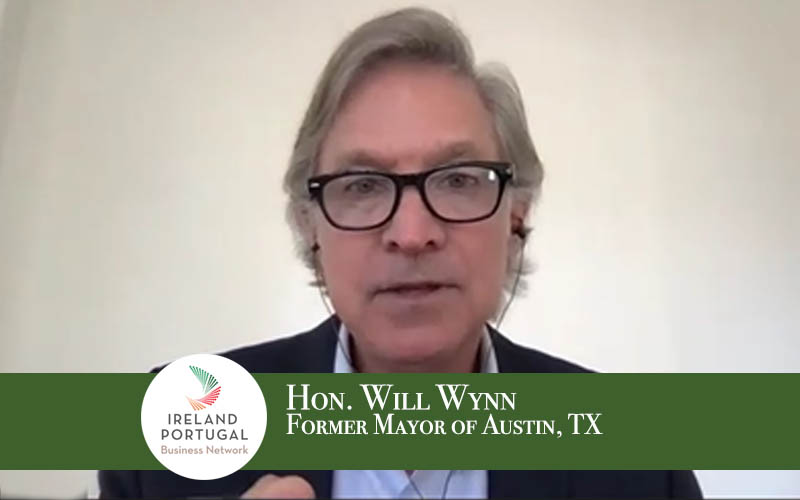